Surely you have heard of the famous Silk Road and the legendary cities of Samarkand and Bukhara at the intersection of this ancient trade route. On this trip, you will not only see the past civilizations in Samarkand and Bukhara, but also discover beautiful landscapes of Uzbekistan, such as Kysylkum Desert, Aydarkul Lake, and Nurata Mountains. This tour takes you through the landscapes of the Kyzylkum Desert, Aydarkul Lake and picturesque villages to Samarkand. You will also be warmly invited by the local families to join a cooking class with the local family. Through this journey, you will experience the hospitality of Uzbeks people.

Arrival in Tashkent. Transfer from the airport to the hotel. Check-in at the hotel. Overnight at hotel.

Tour of Tashkent. After breakfast we start our journey with a tour of the old town of Tashkent. Here we visit Khast Imam complex, oriental market Chorsu, Medresse Kukaldash and the Museum of Applied Arts. Then we take the subway to see some stations. In the evening we drive to the station. We stay overnight on the train. Early in the morning we arrive in Bukhara.

Arrival in Bukhara. Transfer to the hotel. Breakfast in the hotel. Visit the city of mosques and minarets, one of the oldest cities in Central Asia at 2500 years old. Once a major center of Central Asia and home to countless poets, scholars, and princes, it gained legendary wealth, which can still be seen today as a reflection on the many architectural works of art. Bukhara is an open book of the millennial development of Central Asian architecture, which has been a World Heritage Site since 1993.

Sightseeing of the Ark Fortress, which for many centuries was the residence of the rulers of Bukhara, the Mosque of Bolo-Hauz, the Mausoleum of Chashma-Ayub and the 1000-year Samanid mausoleum, the architectural complex Poi-Kalyan with the minaret Kalyan, the Kalyan Mosque and Miri-Arab Medina, Toki-Sargaron goldsmith's dome, Kozh-Medress architectural ensemble with Ulugbek and Abdulaziz-Khan mazes, Tim Abdulla-Khan silk bazaar and Toki Telpak-furushon's dome the city center of the 17th-18th c. Lyabi-Hauz with the madrasas Nadir Divan-begi and Kukeldash and the hostel for Dervish Chanako Nadir Divan-begi; the commercial dome of money changer Toki-Sarrafon, the Mosque Magoki-Attori. Overnight at the hotel.

Breakfast in the hotel. After breakfast, we take a trip to the pilgrimage Nakshbandi, who was one of the famous founders of the Sufi Order. In the afternoon we drive towards Nurata. On the way, we will visit the pottery master's workshop in the city of Gijduvan, which is known for its ceramics, where we will have lunch with the pottery family. We arrive in Nurata and visit the Hazrat Ali Spring. The source is considered sacred and attracts Muslim pilgrims from all over Central Asia. We come to the hotel. Check-in at the hotel. Towards evening we organize a bike test drive in the city of Nurata. Dinner and overnight at the hotel.

Breakfast in the hotel. After breakfast, we cycle into the desert Kizilkum to the direction of Yurt Camp, where we stay one night. On the way, we have a picnic. We arrive in the evening at the yurt camp. In the desert, we spend the night in traditional nomadic yurts. Dinner in the Yurt Camp. Overnight in the yurt camp.

Breakfast in the yurt camp. After breakfast, we start by bike the direction of Aydarkul lake. We arrive at Aydarkul Lake around noon. At the lake, we have a picnic. Our accommodation is located directly on the lake. Free time is available in the afternoon. You can swim if you want. Dinner and overnight at the lakefront accommodation.

Breakfast in the hotel. After breakfast, we cycle to Nurata, where we spend another night. On the way, we have a picnic. We arrive in Nurata in the evening. Dinner and overnight at the hotel.

Breakfast in the hotel. After breakfast, we cycle towards Qushrabat, where we stay overnight with a traditional family. On the way, we have a picnic. We arrive in Qushrabat towards the evening. Dinner and overnight at the Uzbek family.

Breakfast at the Uzbek family. After breakfast, we cycle towards Juma, where we stay overnight with a traditional family. On the way, we have a picnic. We arrive in the family in Juma towards the evening. Dinner and overnight at the traditional Uzbek family.

Breakfast at the Uzbek family. After breakfast, we will cycle towards Samarkand, which dates back to the same time as Babylon or Rome and can look back on more than 2,500 years of history. The city has always been magical in its beauty. Poets and historians called them "the pearl of the Eastern Islamic world". We arrive in the city of Samarkand at noon. Check-in at the hotel. Free time is available in the afternoon. Overnight at the hotel.

Breakfast in the hotel. After breakfast, we visit the Mausoleum Gur Emir, where the famous ruler Tamerlan is buried, and the Registan square, the symbol of Samarkand, the ruin of the mosque Bibi-Khanum, the traditional bazaar "Siyob, the tomb city Shakhi-Zinda. Overnight at the hotel.

Breakfast in the hotel. After breakfast, we make a trip outside the city of Samarkand. Today, we visit Konigil Meros paper mill, where the traditional paper is made from the mulberry tree, the Ulugbek observatory, which played a major role in the development of modern astronomy, the Museum Afrasiab, which tells about prehistoric times of Samarkand. In the late afternoon, we drive to the station. We take the train to Tashkent. Arrival in Tashkent. Transfer to the hotel. Check-in at the hotel. Overnight at the hotel.

Transfer to the airport. Departure. 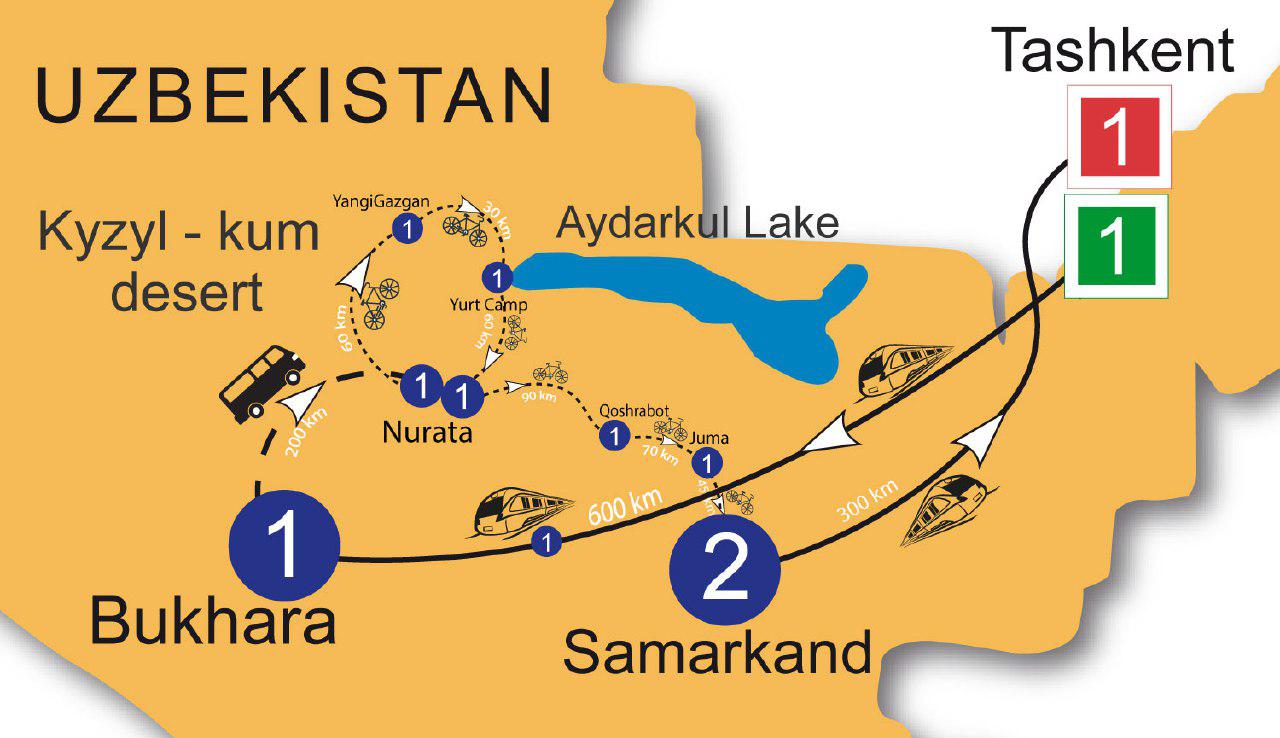 Best of Uzbekistan in 10 Days

Jahongir Travel is based in Samarkand – Uzbekistan. Opened as hotel/guest house in 2009 Jahongir b&b has become one of the top places to stay in Samarkand. As we gained the valuable experience operating the business in Uzbekistan, throughout these years the idea to serve a larger group of people eventually led to opening the separate department “the Tour Operator of Uzbekistan and the Central Asia”..